University model
80 % of our faculty participates in research projects 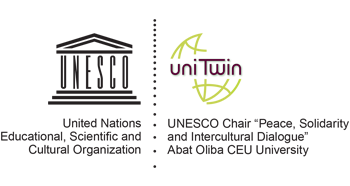 Addressing the underlying causes of conflict is key for charting new avenues for the peace agenda of the United Nations. This is the ambition of a major research project being conducted by UNESCO jointly with the Abat Oliba CEU University in Barcelona (Spain) since 2015 on “Progress and Challenges for the Peace Agenda of United Nations entities after 70 years of the creation of the United Nations: a reflection in the context of the International Decade for the Rapprochement of Cultures”, which aims at analyzing how the UN system has contributed to the promotion of peace over the past seventeen years.

This project has so far brought together over 30 UN agencies in two consultative meetings in Geneva, in June 2016 and in New York in December 2016, in order to look at the contribution of the UN system to the promotion of peace, focusing on past, present and future perspectives of the UN peace agenda. It also brings together an International Steering Committee of eminent scholars and peace activists from around the world.

This project offers a valuable opportunity to look at the UN’s response to the 2030 Agenda for Sustainable Development as the building blocks for lasting peace, while giving a fresh boost to the ongoing International Decade for the Rapprochement of Cultures (2013-2022).